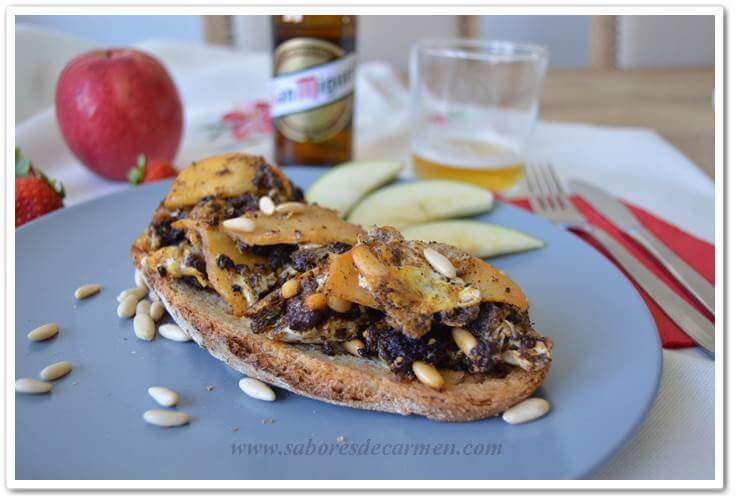 Today, Sabores de Carmen proposes a new recipe, You will love it!

Easy to cook, made with the best black pudding from  Ronda mountains, top quality apple and pine nuts. A delicious and surprising tapa that will not leave anyone indifferent. Let’s do it!

Fry the black pudding without the skin in a frying pan with a little organic extra virgin olive oil.

Before it is browned, add the apple cut into slices.

When the apple is soft, add the pine nuts and cook for a minute.

Add the beaten eggs and finish the scramble.

Spread the slice of bread with the black pudding and apple scramble.

Enjoy it with a good glass of white wine in this occasion, I recommend a dry and fruity Jarel wine, a wine of great elegance, handcrafted in the Malaga Axarquía, which has little to envy the best fines de Jerez. Another drink that goes great and we love it at home is a very cold San Miguel beer. 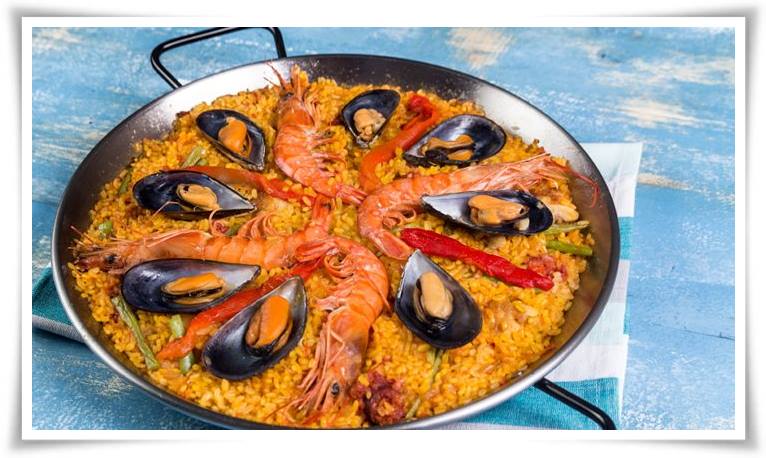 Paella  the most famous rice dish in Spain. It has been at the center of celebrations for centuries and also the best way of receiving friends and family for lunch or dinner.

Sabores de Carmen tells you its favorite Paella recipe. The one we cook at home every week.!

This simple raclette recipe should be the first you try on your raclette grill or raclette melter. For 4 Persons.

Wash potatoes and boil in a pot filled with salted water for about 20 min. Leave the skin on! Test with a knife if the potatoes are done. Keep warm until ready to use in an insulated potato basket. In the meantime remove the rind of the cheese and cut into 1/16″ thick slices using an adjustable wire slicer. Arrange gherkins, onions, and Buendnerfleisch on a platter and set aside until required. Turn raclette on to begin to heat up (allow for at least 5 minutes before using). For Raclette grills: Each guest takes a slice of cheese, places it in their pan and slides it under the raclette grill to melt. It takes approximately 2 minutes to melt to a creamy consistency and 3 minutes for a more crispier top. In the meantime take a potato, place onto your plate and cut it into a few pieces, remove the pan from under the grill once it’s reached its preferred consistency and hold the pan onto its side to scrape the cheese out, using your wooden spatula. For Raclette melter, each guest prepares potatoes and side dishes on their plates. When the cheese starts melting on the wheel, scrape the cheese onto the plate. Season to taste with freshly ground pepper and paprika.

Sabores de Carmen launches this January  «Month of cheese.» So if you like cheese do not hesitate to enter in our website (www.saboresdecarmen.com) to discover the best cheeses and dozens of ways to taste them. As starter or tapa, in the Spanish style, as dessert or melted, in the French style, cured, creamy, soft and intense flavor, always accompanied by a good glass of red wine, cheese gives you a thousand and one ways to enjoy moments unforgettable.

During this month, Sabores de Carmen offers you the best Manchego cheeses and other delicious sheep, goat and cow cheeses at unbeatable prices as well as dozens of recipes to taste and enjoy them. The first 3 orders of the second fortnight will receive a special gift.

Cheese is a very complete food, which concentrates all the nutritional qualities of milk. It contains a high proportion of protein, which makes it even richer than meat.

In the cheese you can find vitamins  A, D and E, fundamental in metabolic processes such as growth, tissue preservation and calcium absorption.

Highly recommended for all ages. During the growth stage, due to its high calcium content. In adults, for the large number of proteins and finally, we  recommend its use to older people because it slows bone decalcification and is more digestible than milk.

It is a cheese with protected designation of origin (PDO) since 1982 and recognized by the European Union since 2007, made from sheep’s milk in the immense plains of Castilla la Mancha. At the moment, the Manchego cheese is produced in 399 municipalities of Castilla la Mancha and is the best selling Spanish cheese in the world.

Is the most representative cheese of the Galician gastronomy and has the protected designation of origin since 1992. It is made from cow’s milk and is produced from over 2000 years ago in Galicia.

It’s a sheep cheese made in the Roncal Valley, along the river Esca in the Pyrenean. It was the first cheese to receive the designation of origin in Spain, in 1981.

This cheese is made exclusively with whole raw cow’s milk in the region of Valais in Switzerland that  received the appellation of origin in 2003. A very rustic fragrant and creamy cheese, it is used mainly melted and give name to the Raclette dish.

Raclette is the name both of this Swiss dish and the cheese used in it. The cheese is melted under an electric grill element and scraped over the accompaniments.

Putting some inflammable liquid in the container * to use less liquid can put a cotton bud along the piggy and ignite. Served on a kebab stick which allows it to be turned and warmed through from all sides.

* The flammable liquid normally used  is alcohol 96 °, although  cognac,, rum, whiskey…can also be used . Each will bring a different touch and taste.